The Seller Portal is a VTEX platform edition used by sellers to connect and sell their products on VTEX marketplaces. What differentiates it from a regular VTEX Admin is the curation of pages: we have selected only the key pages from VTEX’s Admin that fit the most with a seller’s operations.

That selection is possible because Seller Portal is actually a VTEX IO app. All pages available on the Seller Portal are declared in an Edition App, built using VTEX IO. This means that all sellers added to the marketplace’s Seller Portal, will see the same experience, which is defined in the edition app.

In this guide, we will go over some key concepts around the Edition App’s architecture and point out how marketplaces can configure their own Edition App, to create a customized Seller Portal.

Every Seller Portal account is created from a VTEX IO Edition App, which is defined by its sponsor. The sponsor is the entity responsible for defining which pages will be included in that edition. In the code, they are defined as the app’s vendor. The vendor field represents the sponsor and the name field, the seller’s edition app.

It is not possible to create edition apps without a VTEX account as the sponsor.

Two entities can become an Edition app’s sponsor: VTEX or a VTEX marketplace.

VTEX as the sponsor

In default Seller Portal environments, VTEX is the sponsor of the edition. This means that VTEX is responsible for:

VTEX has therefore defined its own edition for the Seller Portal, which includes the default pages that come within an account.

Marketplace as the sponsor

Marketplaces that choose to be sponsors of their own edition app usually want:

The edition app sponsored by the marketplace should become the app’s sponsor and add VTEX’s edition as a “dependency” field. We will go over the step by step process of building your app in the Configuring your Edition App section of this article.

To sponsor an app, please open a ticket to VTEX Support, so your account can be enabled as a sponsor.

Making VTEX’s edition app a dependency automatically includes all of VTEX’s default pages, updates and bug fixes. In this way, you don’t have to manually include all apps in the default experience, they can just import what is in VTEX’s edition.

Once VTEX’s edition is declared as a dependency, you can add your own desired pages in the edition/apps.json file.

Every Edition App has a dependency declared, which imports pages from another edition app. 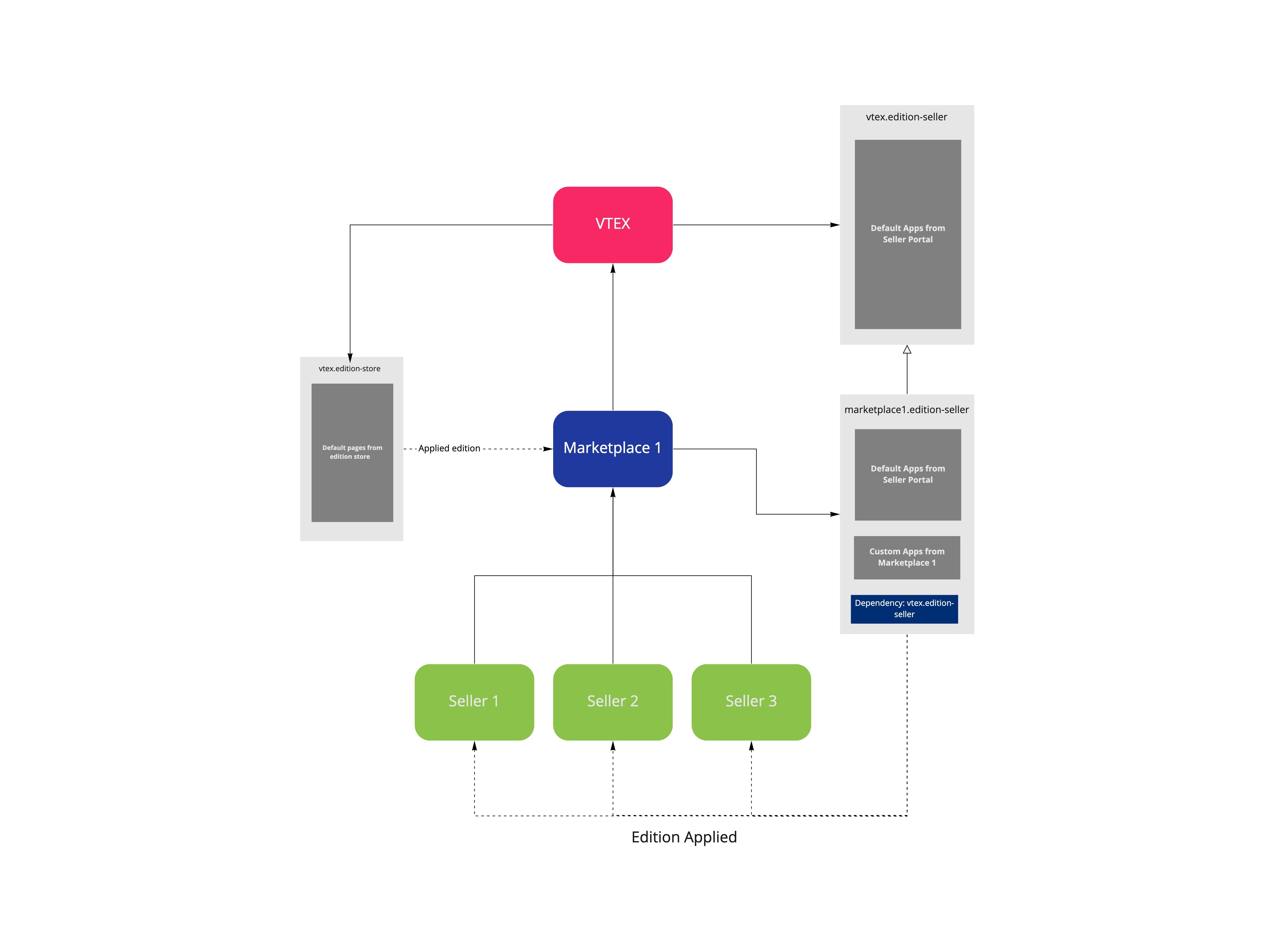 If you don't have VTEX Toolbelt installed, you can also clone it manually:

After cloning the repository, follow the instructions below to configure your app:

After configuring your manifest, you can specify apps to be installed in the sub-accounts that have this edition configured. You do that through the edition/apps.json file, adding an entry to the object under the apps key in the format:

The settings are optional and can be omitted, but they will define the initial settings that should be configured for the app when it is installed through the current edition.

E.g.: The contents of the apps.json file could be:

To test the app, make sure you have VTEX's toolbelt installed.

Edition apps cannot be linked, so for testing, you need to launch a pre-release version and set them on test accounts or workspaces for validation. To do so:

All the apps configured in the apps.json file will be automatically installed in that workspace where the edition was set. You can validate that by inspecting the vtex ls command output.

There is another scenario where more than one marketplace, who are under the same parent company, wish to operate with the same Seller Portal edition app.

In the example below we guide you through the architecture that enables this scenario.

Scenario: Two separate marketplaces, with different sellers, wish to provide the same Seller Portal experience to their sellers, without the complexity of creating multiple edition apps.

We have two market places: The MKPSeller and the Cosmetics2. They are both part of the same holding, but they're different marketplace accounts.

The MKPSeller has created an edition app, based on our default, vtex.edition-seller, and added other custom pages they wish to provide for their sellers. They called the edition they sponsored the mkpseller.edition-seller.

They declare the default edition that VTEX has sponsored, or vtex.edition-seller as a dependency on their app’s code. This action automatically imports all the default Seller Portal apps to their edition app

Meanwhile, Cosmetics2 also wants to create an edition app, copying MKPseller’s edition, since they came to the conclusion that MKPseller's edition fits all their needs.

Instead of creating an edition app and manually adding the desired custom pages one by one, they can simply create their app, and declare MKPSeller's edition as a dependency.

For the dependency to work, MKPSeller must be Cosmetics2 app’s sponsor. This means that Cosmetics2 has an edition belonging to MKPSeller associated to it.

To know which edition is associated with an account, on VTEX Toolbelt, run vtex edition get.

This way, Cosmetics2 edition app will include everything declared in mkpseller.edition-seller. This means including:

Summing it up, to declare VTEX or another marketplace’s Edition app as a dependency, this dependency’s owner must be the app’s sponsor.

The current multiple marketplace architecture has some limitations: