VTEX IO APIs are built with GraphQL - a query language and a server-side runtime for fulfilling those queries with existing data.

Instead of working with server-defined endpoints that return fixed data structures as in REST APIs, GraphQL allows developers to send queries containing the specific data that needs to be fetched over a single endpoint through a POST HTTP request.

That's how GraphQL provides solutions for some of the biggest challenges when designing APIs for modern applications.

Some of the advantages of working with GraphQL are:

Now that you know why VTEX IO uses GraphQL and its main advantages, let's explore some GraphQL basics.

The capabilities of a GraphQL API can be defined as:

All these operation structures, and also the types they consume, must be written down in GraphQL Schema Definition Language (SDL). This is what brings consistency between a query shape and its response shape.

Each field of a schema type is backed by a function called a resolver, which is provided by the GraphQL server developer.

Thus, whenever a GraphQL query is performed, the resolver functions related to the demanded fields fetch data from the appropriate data source and populate the queried fields.

GraphQL ecosystem is growing fast and powerful tools, such as GraphiQL, maximizes developer experience. In the next sections, you'll learn how to install GraphQL IDE in your VTEX account, and how to execute GraphQL queries and mutations with GraphiQL.

Remember to replace the values between the curly brackets according to your scenario.

If you just want to run tests, consider using a development workspace. 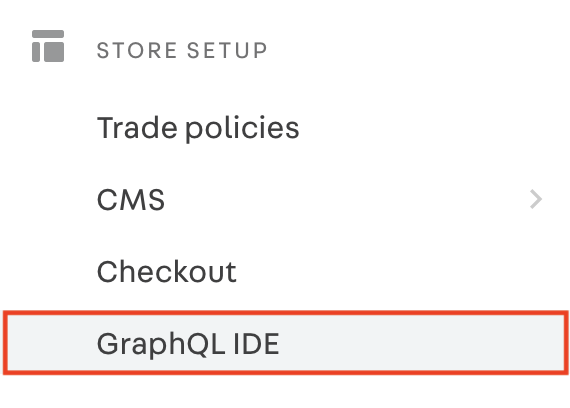 On the right side of your screen, you'll now see a dropdown menu, containing the list of GraphQL APIs that are installed in the logged VTEX account.

Now, everything is set up and you're ready to use GraphiQL.

️ If you're not used to GraphiQL, check the following section to learn more about it.

GraphiQL is an open-source tool for writing, validating, and testing GraphQL queries.

GraphiQL allows developers to validate GraphQL APIs by providing functionalities, such as:

Let's now dive into the GraphiQL interface and features.

GraphiQL interface is divided into three main parts: one for writing queries, another one for checking the results, and a third one named Query Variables, which is optional and hidden at the bottom of the screen.

️ By being aware of types and queries schemas, backend and frontend teams can work in parallel without any problems.

Another feature of GraphiQL is keeping a log of all the performed queries and mutations, which can be consulted in the History panel.

Also, when writing a query in GraphiQL, some useful shortcuts are: